Usually the month of December sees may be two to three big ticket Bollywood releases hitting screens. However, contrary to this, December 2019 sees one big ticket release each week all four weeks of December. While the audience are surely enjoying this plethora of choice, distributors and exhibitors seem to find themselves under tremendous pressure. In fact, the maximum cause of discomfort for exhibitors and distributors is the last two weekends of December that see the Salman Khan starrer Dabangg 3 and the Akshay Kumar starrer Good Newwz hitting screens. Why the pressure you may ask, well we have the answer. As per Salman Khan’s release strategy, the makers of Dabangg 3 have clearly notified exhibitors and cinema owners that they will receive prints of the film on the condition that the movie will be locked for two weeks minimum. With this exhibition strategy for Dabangg 3 the exhibitors have been put in a catch 22 situation especially since the Karan Johar produced Akshay Kumar starrer Good Newwz releases the following week. 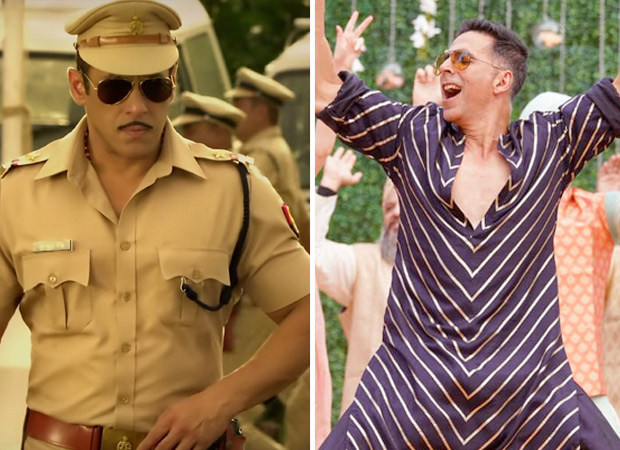 Commenting on the increasing pressure a trade source says, “Exhibitors have been told that they will be permitted to screen Dabangg 3 on the condition that screens will be locked in for a two week period. Now, the thing is no one wants to miss out on the profits that will be generated from a Salman Khan release around a festive season. But then there is also the fact that Akshay Kumar, who has been enjoying a stellar year so far, has a release in the following week, essentially meaning that Dabangg 3 will have just a one week uninterrupted run.” Continuing to detail the exhibitor’s plight our trade source continues, “Given Akshay’s recent releases and their success coupled with the fact that the audience have taken a liking to the trailer of Good Newwz, exhibitors are sure that the film will open on a high note. And herein lies the issue, since exhibitors want to cash in on both Dabangg 3 and Good Newwz, but are faced with a hard choice due to the lock in period.”

Interestingly though, while Salman Khan’s team at SKF have already begun talks with exhibitors, we hear that the latter are willing to commit to a one week uninterrupted run for Dabangg 3 with the second week being subject to performance. Explains our trade source, “Exhibitors have agreed to give Dabangg 3 an uninterrupted run in its first week, but are the second week will be subject to the box office performance of Dabangg 3 in week 1. No one wants to lose out on business that Good Newwz will draw in, and if they agree to the demand of SKF that would mean the Akshay Kumar starrer doesn’t get room.”

Concluding his explanation of the situation, our source says, “As of now, the decision seems to be tilting in favour of the exhibitors, who have decided to allocate screens to Dabangg 3 in its second week based on the film’s performance in the first. Now it remains to be seen whether Salman Khan and SKF close this deal or push for an uninterrupted run for two weeks.”