Salman Khan’s Radhe creates history; breaks records and becomes the most watched film on Day 1 with 4.2 million views across platforms

In India, Radhe – Your Most Wanted Bhai released on ZEE5 with ZEE’s pay per view service ZEEPlex; along with leading DTH operators and it released theatrically in international markets yesterday and opened to a thunderous response from the audience. Right from fans cheering for the film in theatres overseas, to massive bookings on streaming platforms, the fans of the superstar watched the film as soon as it released making it the most-watched movie on the day itself sending the servers crashing while making it a total Eid blockbuster. 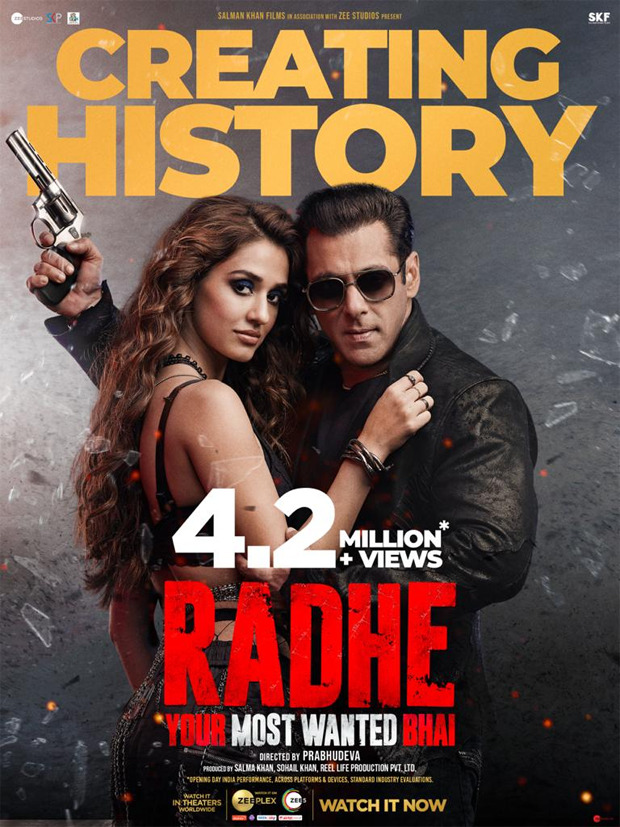 Very importantly, Radhe emphatically demonstrates the success of a hybrid release and shows an effective model of releasing a film during these very tough times. This would be important not just to the stakeholders of Radhe but to the entire film industry of the country that is reeling under the impact of the pandemic.

All the statistics of Radhe are testimony to the fact that when immense star power meets widest reaching platforms, history is created even in the toughest of times with constrained theatrical capacities. This reinforces the fact that multi-platform simultaneous release is the future of entertainment and will grow multi-fold in the years to come.

Shariq Patel; CBO – Zee Studios said “The film has won over audiences and through this unique and never-seen-before distribution strategy we could ensure the widest possible ‘opportunity to see’ this high-on-entertainment, quintessential Salman Khan movie at a place and time of audiences’ choice. With unprecedented circumstances comes the responsibility to make innovative choices that will pave the way for future business models and Zee is at the forefront of it”.

NOTE: Details in the article are as per data shared by Zee Studios